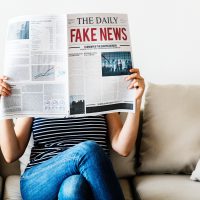 The internet is growing rapidly and there are more people using it every day. However, by becoming the main source of information for many people, a new wave of misinformation has risen. Fake news and fake information on the internet can cause a chain reaction with detrimental effects.

Fake news is a type of media that spreads false information through traditional media outlets and the internet. Fake news are written with the intent to misinform people in order to damage the reputation of a person or an organization, gain the favor of someone, misinterpret actual facts, or as a hoax. The intention of these outlets can either be commercial or political. Many of the outlets that promote these stories attract viewers to their websites in order to generate advertising revenue, while other outlets want to influence the public opinion to their or their affiliates benefit. The relevance of fake news has increased with the popularity of social media, where the magnitude of fake news is so great that they compete with legitimate news stories. Political and national actors have been accused of spreading fake news, to influence a political decision.

Fake news undermines serious news outlets. The spread of misinformation is so pervasive that many people deny actual news as fake. Less people are seeking for the truth because it isn’t as interesting as the fake information. Popular fake stories can circulate for weeks and influence the opinion of many people. The constant circulation of an untrue story makes it familiar to the public, and the familiarity becomes a fact in the minds of many people.

People need to be aware of how fake information is used and how to identify it. It is very important for the reader to check the source and its credibility. The reader should be weary of how they spotted the article, and vet the publisher’s credibility. They should look for quotations and contributing sources, and check the quotes with other reputable sources. A news story with quotes and not enough other contributing sources is a sign of fake information. On the other hand, a well-researched story with well-cited sources is likely to be reliable. It is helpful to check the citations too.

Another indicator of a fake story is how dramatic it is. Many fake news outlets write dramatic stories to attract attention. They typically employ capital letters, or intense punctuation, in addition to the dramatic content of the story. Some of the topics include an impending catastrophe, a scandal, a very simple solution to a very complex and serious problem, and a recycled story that is taken out of context. All these indicators are signs that the story is not very reliable.

Finally, it is crucial to check the publisher. It is important to know the author and their credentials. An unknown author writing for an unknown or non-credible website is highly suspicious. Just because a website is popular it does not mean it is reliable. Read about the publisher and their mission statement. Reputable sources do a lot of proofreading; so grammatical mistakes can be very suspicious. Also be aware of the domain name, it might look like the domain of a reputable source, but it could be a sham designed to appear similar to the original.

The spread of fake news and fake information is a topic of great concern. People should shield themselves from misinformation by learning how to identify a fake story and discern what is reliable and what is not.

View in our blog: